Devastation of Hurricane Hazel on Southampton remembered at Memorial Service 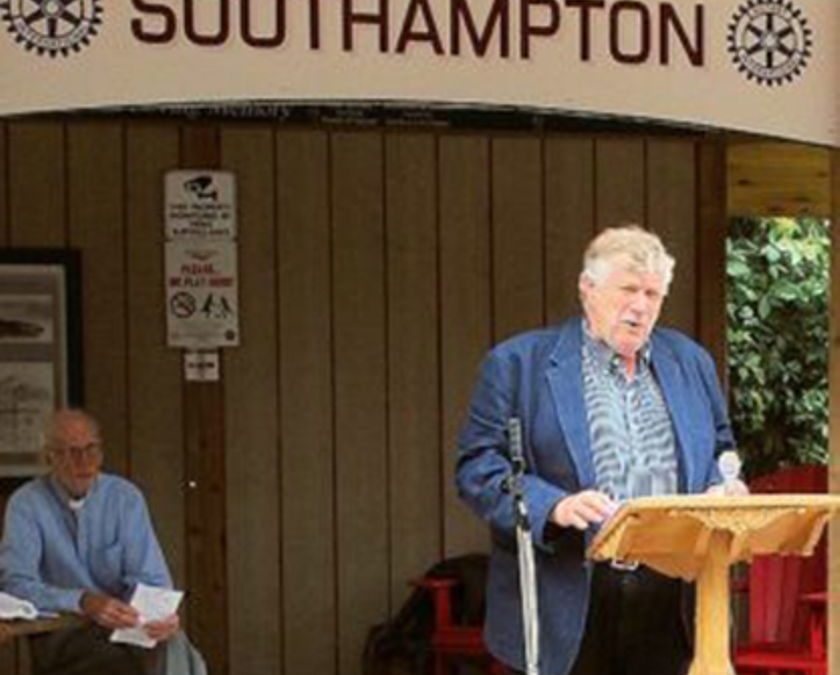 Article by Frances Learment of the Shoreline Beacon

The devastation left in the wake of Hurricane Hazel, including the two trainmen killed in Southampton, was marked Sept. 15 at the 13th annual Saugeen RailTrail Memorial Service.

Saugeen Shores Vice Deputy Mayor Mike Myatt, RailTrail chair Joyce Scammell and Trail Manager Gerry Boucher offered greetings from the Town of Saugeen Shores to a crowd of over 40 people at the service.

Jonathan Nicholson, son of the Nicholson family (who could not attend) shared his father’s memories of hurricane disaster, at the site where trees were planted in memory of the two trainmen.

who lost their lives in the Hurricane Hazel disaster.

He said the trains made their way to the Harbour of Refuge delivering supplies and furniture.

We were reminded that Ken Diebel, a young 17-year-old machinist and Hurricane Hazel survivor, carried the pain of the disaster for over 54 years, reliving the terrible night.

In 2008, Diebel returned to the “place of pain” for the first time, and met the Nicholson family, which made him break down and cry.

This time was not a floodwaters, but an “emotional flooding” at the Memorial Garden, regarded by man as a safe and healing place.

The Memorial Service concluded with the SRT Padre, Rev. Bob Johnston, who has faithfully officiated at service for over 13 years.

Special thanks was offered to the many caring volunteers and those who have adopted specific areas of the Memorial Gardens; to graphic designer Jeff Hemming, and muralist Bert DeGraff.